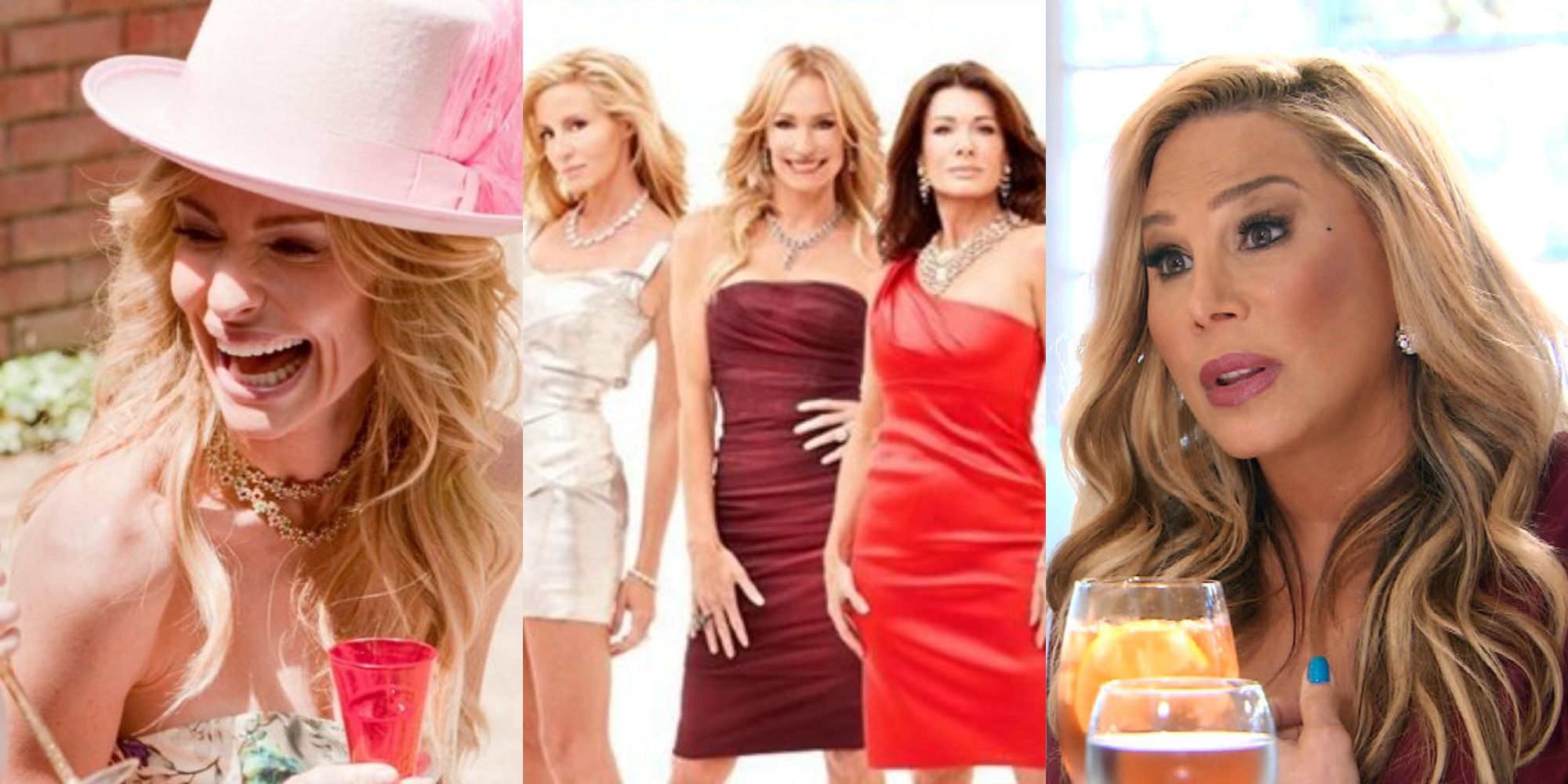 Bravo’s The Real Housewives of Beverly Hills was the sixth city to join the reality franchise. Housewives fans had seen the grit in New Jersey and the outlandish spending in Orange County, but now it was time to live vicariously through the rich of the rich in Beverly Hills.

RELATED: The Real Housewives Of Beverly Hills: Why The Dinner Party From Hell Is One Of The Most Iconic Episodes Of All Time

The first season aired in 2010 and featured Kyle Richards, Kim Richards, Lisa Vanderpump, Adrienne Maloof, Taylor Armstrong, and Camille Grammer as the main cast. Just like every Real Housewives series, RHOBH brought the drama. Just because the ladies were wealthy and full of poise and prestige didn’t mean they were above getting down and dirty. Keep reading to relive the wild adventures of season 1.

Updated on June 10th, 2021 by Lynn Gibbs: It has been 10 years since the inception of The Real Housewives of Beverly Hills and it’s fair to say that not much has changed within the show aside from the cast. The drama keeps getting better, the casting choices are smarter, and the women never seem to age. The city of Beverly Hills is unlike any other in the franchise. And now that season 11 is off to a great start, fans can’t help but look back at season 1 and see how far the ladies have come. The storylines in this season were far darker than most of them going forward, and it’s fascinating to see how much has changed between 2010 and now.

For Kenndy’s birthday, former Housewife, Taylor, threw a gigantic party as a way to keep up with the Joneses. Her husband Russel didn’t seem all that interested in the party Taylor was throwing but did want to give his little girl a puppy. Taylor begged him to not get the puppy because they were already busy as it was and who knew if she was allergic to it or not. Lo and behold, Russel showed up with a puppy despite his wife’s words. Kennedy grew attached to the puppy and Taylor’s fear came true: Kennedy was, in fact, allergic. According to Twitter, Taylor noted that Kennedy’s eyes were swollen and she had rashes on her body. They ended up giving the dog away to another family, making the entire situation emotional and annoying.

In ‘Plenty of Baggage,’ the ladies of Beverly Hills head to Las Vegas for a concert and to stay at Adrienne’s hotel and casino. After dinner, viewers saw the ladies go to the club to party. Everyone was having a good time but the camera couldn’t shy away from former Housewife, Camille. As soon as Camille entered the lounge, she began dancing very “sexy,” as Paul Nassif described her. Lisa described her as “Shaking it and moving it” and compared her to an adult dancer. Camille’s dancing became an instant meme and GIF in the RHOBH fandom.

11 The Contrast In Storylines From Season 1 To Now

The difference in tone between season 1 and season 11 is vast. Over the years, RHOBH has faced the same backlash that other cities have in regards to falsifying storylines or seasons being too focused on one particular disagreement. But in season 1, there wasn’t any of that; it was incredibly dark.

RELATED: Every Season Of The Real Housewives Of Beverly Hills, Ranked

Aside from the horrid abuse allegations from Taylor regarding her husband, Camille was facing marital woes, and Kim and Kyle were in a years-long argument that didn’t play out well on camera. None of those storylines were contrived.

In the episode ‘It’s My Party and I’ll Spend If I Want To,’ viewers found out just how rich the Armstrongs were when they threw a birthday party for their 4-year-old daughter, Kennedy. Casually speaking to the cameras, Taylor says that birthday parties for kids in Beverly Hills can run up to $50,000. At the party, their entire backyard was decorated with flowers and all things pink. It was a tea party theme with different hats, teapots, and a whole lot of expensive activities for kids and their parents.

Camille Grammer was still married to Kelsey Grammer in season 1 of RHOBH. However, with Kelsey working in New York, Camille was alone with her kids quite often on the West Coast. It was obvious that things weren’t going well for the couple, and that was fully realized when she went to see him in New York.

RELATED: The Real Housewives of Beverly Hills: 10 Things That Happened In Season 2 That You Completely Forgot About

The pair acted like strangers. But when Kelsey was nominated for a Tony, Camille fled to New York to be his red carpet date (regardless of knowing that their marriage was over).

8 Allison DuBois Caused One Of The Most Memorable Dinner Scenes

Allison DuBois was a key player in the most dramatic dinner party to end all dinner parties. Hosted by Camille, the season 1 ladies headed over to the Grammer estate for dinner and conversation. Allison DuBois was a psychic and Camille’s friend. After one too many strong drinks and tension at the table, Allison lashed out at some of the ladies, especially Kyle. Allison essentially said Kyle and her husband were unfulfilled in their relationship and she was in a loveless marriage. As one can imagine, tears were shed and harsh words were exchanged.

7 Kyle’s White Party Was A Mess

In the episode ‘How to Behave,’ Kyle and her family threw a white party where everyone had to wear white. The ladies tried their best to get along, but when Camille showed up with an off-putting gift, Kyle grew annoyed.

Camille presented Kyle with a “joke gift,” a book called How To Behave. Camille thought the book was appropriate because she didn’t enjoy Kyle’s behavior at her pool/tennis party earlier…

When being introduced to Lisa and Ken in the pilot, they mentioned they had a houseguest named Cedric. Cedric had a close relationship with Lisa and Ken in London and followed them to Beverly Hills. But what once started as a short-term stay lasted over a year. Eventually, Cedric got greedy, and Lisa and Ken had no choice but to move on with their lives without him.

5 Taylor’s Marriage Was On The Outs

Taylor was married to businessman Russell Armstrong for six years. The pair didn’t seem incredibly in unison but there had to be love there, right? As the first season went on, it was obvious the couple was hanging by a thread. All of the money and clothes couldn’t mask Taylor’s unhappiness anymore. Their daughter Kennedy became their only commonality. Taylor admitted that Russell did get physical with her on more than one occasion and she felt stuck. It was an upsetting situation and shortly after proceedings began, Russell committed suicide.

4 The Limo Ride From Hell

Kim and Kyle Richards may have been sisters, but they were estranged. Due to their difference in parenting and general lifestyle, the two fought often. Kim also had addiction issues, which caused Kyle and their family pain. In the season 1 finale, Kyle had enough of Kim’s erratic behavior and threatened her in the limo. She called Kim an alcoholic and that if she didn’t get help, she and her husband were done financially supporting her. Looking back, it was an incredibly hard scene to watch between sisters.

Remember Adrienne Maloof? For anyone who didn’t watch the first season of Real Housewives of Beverly Hills, she was married to Botched star Paul Nassif. He’s more of a star than she is these days, but she’ll always be fondly remembered for her time on RHOBH. Being married to Paul, the couple seemed like an odd relationship. He was so goofy and light-hearted and appeared to bother Adrienne with everything he did. It wasn’t much of a surprise when the two got divorced in 2012 (two years after season 1).

2 Lisa & Adrienne Lived Across The Street From Each Other

In the pilot episode of season 1, Adrienne is explaining her family business and what made them as rich as they were. Not only was Paul a plastic surgeon, but she also co-owned the Palms Casino Resort in Las Vegas. They also lived right across the street from Lisa and Ken. Bravo fans know how divine the Vanderpump home is, which can give an idea of how nice the Maloof home was as well.

1 Kim And Taylor Never Got Along

Although Taylor only lasted three seasons and Kim lasted five (before returning as a guest and a friend), these two never got along. No matter how many fake apologies were shared, they always came back swinging. It wasn’t until after their time on the show that the ladies came together and supported each other.

NEXT: The Real Housewives: The 12 Most Successful Housewife Businesses, Ranked


Next
10 Funniest Ladies From The Bachelor, Ranked

Lynn is a nomad who travels the globe on the hunt for her next adventure. A lover of being outside (and finding the best latte in town), Lynn loves to write about her favorite topics and shows.