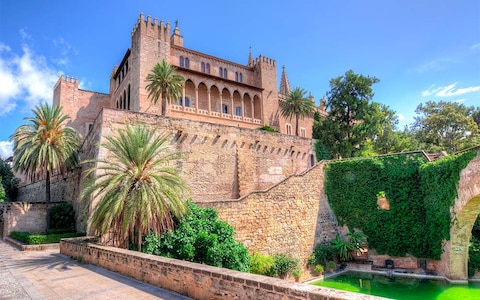 Edgy districts, traditional taverns and modern art on the Mediterranean

With a dramatic and turbulent history harking back to the Bronze Age, Palma has had its fair share of invasions – from the Romans and Vandals to the Moors and Christians. So it’s hardly surprising that this perky, perfectly formed city has such a welcoming and grown-up attitude to international visitors. With the glistening Mediterranean Sea at its feet, this effortlessly accessible capital offers a delicious melting pot of cultures and historic influences. Whether in the cobbled streets of the atmospheric old town, or in the heart of the grand plaças, impressive monuments, museums, galleries and churches of Gothic splendour abound. Edgy districts happily rub shoulders with more traditional and exclusive neighbourhoods, while a vibrant food and shopping scene weaves its magic across the city. So much to do, so little time? Head for a seafront café, breathe the air, relax and enjoy that first sip of ruby red Majorcan wine.

Start the day at landmark La Seu cathedral (Plaça de la Seu; 00 34 902 022 445), which looms above the city walls, and admire the shimmering Parc de Mar Lake below. Don’t miss the quirky re-design of St Peter’s Chapel by artist Miguel Barceló, before heading to neighbouring Almudaina Palace (Carrer del Palau Reial; 00 34 902 044 454). There’s some exploring to be done at this gothic masterpiece, but on a sticky day, take respite in the King’s Orchard, a smaller version of Granada’s Generalife water garden.

Now stroll up the leafy Borne, once a river in the 17th century, and pop into Centro Cultural Can Balaguer and take a peek at Café Balaguer’s patio (Carrer de la Unió; 00 34 971 72 01 35) where you’ll find 4,000 years of history and impressive skeletons at the Sa Galera exhibition. On Jaime III, take a right turn for Fera restaurant (Carrer de la Concepció, 4; 00 34 971 595 301) where you can enjoy a cool glass of wine and an exceptional menú del día. Expect exciting creations such as crab roll in salsa verde, or subtly flavoured sea bream ceviche with pomegranate tiger milk and shiso.

Walk off lunch along Jaime III, home of the famed El Corte Inglés department store (00 34 971 770 177) and various chic boutiques. From there, cross over to trendy Sant Nicolas, a labyrinth of stylish shops, before continuing to Plaça Santa Eulàlia in the Calatrava historic quarter, with its medieval cobbled streets, exquisite patios, bijoux palaces and renaissance architecture.

Bear left on the far side of Santa Eulàlia Church and take time out at Ca’n Joan de S’Aigo (Carrer de Can Sanç 10; 00 34 971 71 07 59), Palma’s oldest and most cherished café, for a snail-shaped ensaïmada pastry and refreshing cup of tea. On your departure, pass the magnificent Plaça Sant Francesc and church (pop in if the fancy takes you), and cut through the lean streets to quaint Santa Clara Convent (Carrer de Can Fonollar, 2; 00 34 971 71 006), where you’ll need to ring a bell to buy the sisters’ delicious lemon biscuits.

Aim for Santa Catalina, a five-minute taxi journey from the centre, or walk through La Lonja old town area towards Santa Catalina, just 15 minutes away on foot. If you’re on a budget, stop here at Café Sa Lonja (Plaça de La Lonja; 00 34 971 722 799) for good-value tapas on the terrace. Otherwise, head on and enjoy dinner at svelte and urban Vandal (Plaça del Progrés; 00 34 871 045 174), where an Argentinian chef and sommelier duo conjure up a world menu of bold and inventive dishes, expertly matched with local and international wines.

After dinner, take a fun two-minute stroll through this buzzing enclave with its village feel, lively bars, stores and cafés, and enjoy a welcome cocktail or hierbes local liqueur at rooftop Sky Bar at Hotel Hostal Cuba (Carrer de Sant Magi, 1; 00 34 971 452 237). Here you can enjoy mesmerising views over the Bay of Palma on the lovely rooftop terrace, while enjoying a relaxing and welcoming ambience.

• The best restaurants in Palma

The best things to do in Palma
Insider tip | City hack

The city’s bustling Olivar market (Plaça Mercat; 00 34 971 720 314) is a wonder to behold and it’s a pleasure to browse the halls of seafood, fruit and vegetables and observe locals bargaining with stallholders.

From here, stroll up to majestic Plaça Mayor, surprisingly, for 300 years the seat of the Spanish inquisition, and head for Plaça de Cort with its 600-year-old olive tree and medieval town hall. Stop here for a coffee or fresh orange juice, perhaps at Café Cappuccino (Plaça de Cort; 00 34 871 03 74 37) before weaving through the pedestrian cut-throughs to El Borne.

Cross over to Calle Sant Feliu and head for Es Baluard museum (Plaça de la Porta de Santa Catalina; 00 34 971 908 200) to view its eclectic collection of neoclassical, abstract and modernist art. Have a snack lunch in the alfresco café on the rear patio surrounded by modern sculptures, and enjoy the spectacular views over the city walls to Palma bay.

Jump in a taxi and drive a few kilometres from the city centre to Bellver Castle (Carrer Camilo José Cela; 00 34 971 735 065), which sits aloft a peaceful wooded hill overlooking the Bay of Palma. Dating from the 14th century, it is the only circular castle in Spain and one of few in Europe. Allow for an hour’s visit, as there is a courtyard, museum and historic kitchen worth seeing, and then hop in a taxi and set off for the Joan Miró Foundation (Carrer de Saridakis, 19; 00 34 971 701 420) in Cala Major, just a five-minute drive away.

Here you’ll find a vast display of the prolific artist’s works, including paintings, sculptures and ceramics.  Meanwhile, the artist’s re-imagined studio and home give an authentic feel to the estate. Enjoy a coffee in the grounds after exploring the fragrant gardens.

Head to Calle Sant Feliu for dinner at De Tokio a Lima (Calle San Feliu, 1; 00 34 871 592 002) on the spectacular, candlelit roof terrace of Boutique Hotel Can Alomar. Offering a fusion of Peruvian, Japanese and Mediterranean gastronomy, this stylish eatery sets a mellow and relaxing tone, and staff members extend a warm welcome to customers.  A good selection of wines and tapas sharing plates are offered so there’s no need to break the bank. The location is particularly special with sweeping views of El Borne and the giant plane trees flanking it, as well as the city’s lights.

For a postprandial treat, pop along the same street to enduring local favourite, Café Atlantico (Calle Sant Feliu, 12; 00 34 971 726 285), for chilled music and innovative cocktails such as the Smoky Storm, a heady blend of rum, cinnamon and chocolate.

• The best nightlife in Palma

Sant Francesc Hotel Singular is a skilfully renovated, 19th-century mansion and boutique five-star situated in the capital’s atmospheric historic quarter. Designed by well-known architect and designer, Maria José Cabré, the hotel has a warm, relaxing and pleasant ambience. There are 42 elegant and individually styled rooms; a number have balconies and verandas, and dreamy views over Sant Francesc square or the hotel’s garden.

With its stylish white façade, deep blue shutters and jaunty, nautical theme, Hotel Portixol has the feel of a beautifully designed yacht. It occupies an exclusive position in the gentrified harbour, directly overlooking the sea, and inside has a relaxed Scandinavian feel. There are 25 comfortable rooms comprising port and sea view doubles and two large suites, one of which, Atico, occupies the top floor and has its own lift and roof terrace.

The four-star Brondo Architect boutique hotel is a good-value and comfortable urban getaway right in the heart of Palma. It comprises three buildings in the same street and marries 17th-century Majorcan architecture with modern industrial design (no mean feat). The pièce de résistance on the first floor is the lovely bright dining-room-cum-bar and tranquil, leafy, wood-decked courtyard.

• A complete guide to the best hotels in Palma

Palma is temperate most of the year, even in the colder months when the temperature can drop in other parts of the island. As an all-year-round destination, most of the hotels stay open, unlike those in the beach resorts. Off-season, particularly from January to April, and mid October to December, there are hotel bargains to be had. Special city fiestas include the Three Kings parade on January 5, Easter processions, Sant Juan fire fiesta in June and Nit de Art, night of art, in September.

• Anti-social behaviour, such as drinking in public, and wearing inappropriate attire, such as beachwear, is unacceptable in Palma city and local police can issue heavy on-the-spot fines. Drunken and aggressive behaviour is not tolerated in local beach resorts either, and fines may be issued.

• Although Majorcans speak Castilian Spanish, they are proud of their own language, Mallorquin, a dialect of Catalan. Road signs and public notices will often be written in the local language.

• Tipping is at a client’s discretion but 10 per cent is considered acceptable.

• Mainly due to the warm weather, Majorcans tend to dine later so 2pm at lunchtime, and in the evening, the majority of locals won’t arrive at restaurants before 9pm and often later.

• Normally Majorcans – male and female – will shake hands at a first meeting but some might offer women kisses on both cheeks. Men often hug male friends in public.

Anna Nicholas is Telegraph’s Palma expert. Since settling on the island 17 years ago, she has written six Majorca titles, offering a brilliant excuse to explore the city and island. You’ll find her sipping espressos in a café on El Borne.

Experience Palma with The Telegraph

Movie And Streaming Audience Analytics Corp EntTelligence Launches With Steve Buck as Partner
Ron Insana: For the first time ever, a recession could end with a bear market
10 amazing things we’ve learned about Microsoft Flight Simulator 2020
Trojan & Chill is everything you need this cuffing season
Bella’s House From Twilight Is Real, And You Can Even Take A Digital Tour