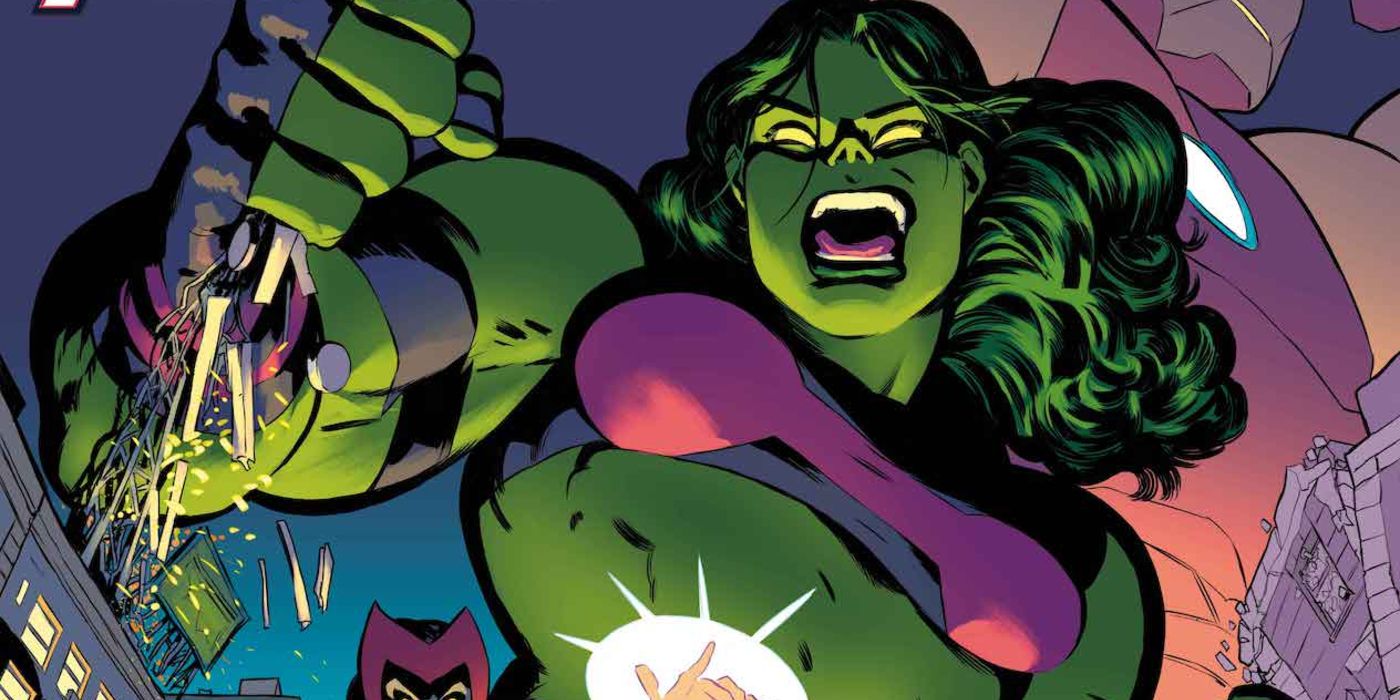 Marvel Comics has released early previews of the treats in store for fans of this year’s Halloween classic horror cover variants.  Part of the first wave of previews, Avengers #37, features monstrous versions of She-Hulk and Scarlet Witch attacking New York City as citizens scatter and flee from these gigantic versions of two of Earth’s Mightiest Heroes.

The Avengers, Marvel’s flagship title and team, is one of the eleven covers revealed so far before they appear on the shelves of comic stores throughout the month of October. These scary covers showcase the talents of artists such as Mirka Andolfo, Javier Rodrigeuz, and Aaron Kuder, along with others as Marvel salutes its horror history, which has included titles in the horror genre as Werewolf by Night, Tomb of Dracula, and many others. Looking to continue this tradition, these variant covers will feature horror-themed takes on characters like Iron Man, Captain Marvel, the X-Men, Spider-Man, and Black Widow, with future cover reveals to include Thor, Spider-Woman, Marauders, and Captain America.

Related: Godzilla Once Fought The Avengers AND Fantastic Four

Marvel announced the variant themes, coming just in time for Halloween, would highlight their proud history of horror-themed comics and classic terrifying tales, and that these works will be “honored in a series of Horror Variant covers!” Steel your nerves as these Marvel characters are menacingly presented as you’ve never seen them before. Other covers with similar spooky themes will include the X-Men re-imagined as classic Universal Monsters, Spider-Man as a vampire hunter, the swamp monster Man-Thing combined with Iron Man, and a raging mummy Hulk. These are just a few of the nightmarish fantasies the publisher has in store this Halloween.

The cover for Avengers #37 pays tribute to the classic Where Monsters Dwell series, which ran from 1970 to 1975, written by Stan Lee and featuring art by Jack Kirby and Steve Ditko, among others. The original series featured such monsters as Grottu, Sporr, and Groot, along with other larger than life creatures and stories in an anthology format. The cover for this issue is the work of Javier Rodriguez, who channels his inner Kirby to make She-Hulk and Scarlet Witch larger than life. Other artists contributing to these covers are some of the top in the industry, such as Russell Dauterman, Mike Del Mundo, and Leinil Francis Yu, all of whom have re-imagined today’s Marvels heroes into some delightfully creepy visions.

Avengers #37 arrives in comic stores and digital platforms on October 14, 2020, concluding Jason Aaron’s AGE OF KHONSHU arc as the Avengers make their final assault on the mad Khonshu, deep in the heart of New Thebes City, forcing Moon Knight to choose sides.

Next: Spider-Man Finally Takes On Marvel Zombies This September

Chad Burdette is life long comic book reading and collector with many issues, some of which are bagged, boarded, and filed away. Chad is originally from West Virginia but now lives in Albany, NY.