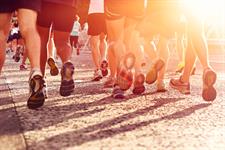 Four out of five mass people who have participated in mass charity race events would be willing to race again within three months of lockdown being lifted, a survey has found.

The survey found 82 per cent of charities had lost donations as a result of the pandemic, and 54 per cent of event organisers had suffered losses of 50 per cent or more.

Once events do resume, many event organisers believe ticket sales are likely to increase, with 35 per cent saying this would happen because entrants have not competed in person for a while, and 19 per cent saying they believe more people have taken up running during lockdown.

More than half (59 per cent) of charities said they planned to run more events in future to make up for the loss of donations during the pandemic.

But the survey suggests that the rise in virtual events during lockdown may not continue long term – while 53 per cent of race participants said they had taken part in at least one virtual event in recent months, just 10 per cent said they would be likely to continue participating in the future.

Will Golder, director of RaceNation said: “While there are inevitable challenges ahead, we remain positive that the strong appetite from participants along with the passion from event organisers and charities will put the industry in a strong position to come back fighting for the remainder of 2020 and into 2021.”