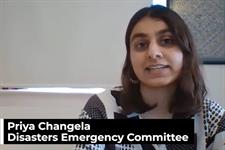 Donor-centric fundraising materials risk reinforcing ideas of white saviourism, and it is up to fundraisers to reframe the discussion, according to Priya Changela, marketing and fundraising officer at Disasters Emergency Committee.

Changela called on fundraisers to help dismantle the white gaze during a session on ethical copywriting at Fundraising Everywhere’s BAME Fundraising Virtual Conference 2020, where she spoke alongside consultant Kristie Lockhart.

“In fundraising we are often told we have to make our writing audience-centric, therefore we’ve developed a view over the time of the donor as the hero, reinforcing this idea of white saviorism,” Changela told delegates.

“While audience-centricity is important, it should never be at the expense of the people we are writing for. This donor-centric ideology has led to systems that often protect the donor rather than the participants of the programs.”

Changela shared examples of fundraising images, arguing that the less that is known about the person featured in the image, the more they remain a random beneficiary under the white gaze. This approach risked reinforcing systematic inequality, she warned.

She called for fundraisers to ensure that the voices of the communities the sector works for were heard, and said fundraising campaigns should be written in equal solidarity with them.

Lockhart explained that the white savior mentality was the result of colonial, capitalist and patriarchal thinking: structures that allowed charitable ‘givers’ the opportunity to demonstrate their generosity while continuing to perpetuate injustices.

And, Lockhart warned, “white saviour ideology”, and the “romanticised self-image of the role of the missionary as a saviour” still form part of modern philanthropic rhetoric.

“As fundraisers I think we have a really significant influence in how the reality of the countries and communities we work with are presented to donors,” she said.

“In order to dismantle the white savior complex and white gaze within our work we must first unpack the privilege that shows up within the structures and spaces we operate.”

Lockhart called for a process of both learning and unlearning the privileged behaviours that have come to shape the sector.

Organisations must find new ways to reframe narratives used in fundraising efforts, which are more holistically representative and inclusive of the communities and the people they serve, she said.

Fundraisers should “help to shape the culture within their organisation, and model equity, equality and justice” in their work”, Lockhart concluded.

“Promote and embrace diversity in all of your projects, and continue to implement anti-racist practices across our organisations and the environments they operate in,” she said.

Krypton Season 2 Will Finally Release on DC Universe
Best Outdoor Activities in Montana
Abandon use of ‘Empire’ in the British honours system, charity leaders urge government
A surge in evictions could turn into financial crisis, economist warns
Warren Buffett adds to his Bank of America buying spree, bringing stake to 11.8%