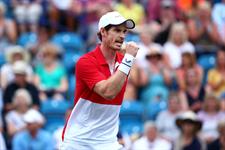 Andy Murray will feature in the behind-closed-doors event, which is being co-organised by his brother Jamie and will raise a minimum of £100,000 for NHS Charities Together.

The Battle of the Brits tournament, which will also feature other leading GB players including Kyle Edmund and Dan Evans, will take place between 23 and 28 June at the Lawn Tennis Association’s National Tennis Centre in south-west London.

Speaking at the launch of the event, Jamie Murray said: “The last few months have been incredibly challenging times for everyone, and we see this event as our way of giving back.

“A lot of work has gone in to make sure this could happen and we are very excited to be able to bring an action-packed week of tennis, while raising valuable funds for NHS heroes to say thank you for the amazing work they have done.”

Why Star Wars Should Never Retcon The Sequel Trilogy
The billionaires and country clubs that received small business loans from the government
Koh Samui luxury villas for sale: Bophut Hills holds the private residence, Villa Suralai
Elements Studio
8 Shows Like Criminal Minds That You Should Watch if You Like Criminal Minds