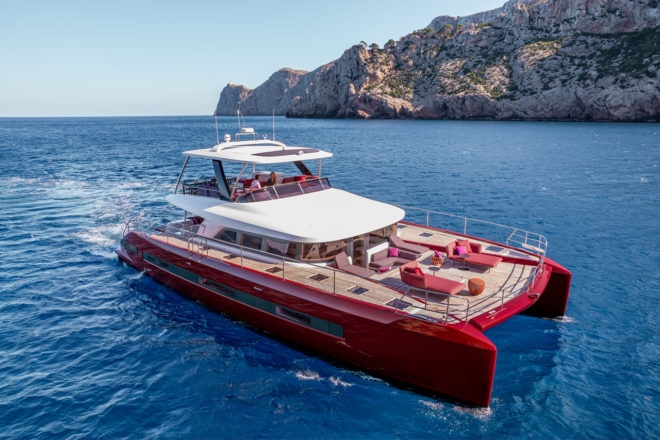 In late 2017, Lagoon made headlines by launching its Seventy 8, a power catamaran as large as a tennis court, measuring almost 24m in length with an 11m beam.

More recently, the French builder showcased its ‘little sister’, the Sixty 7, with the red-hulled beauty making its North American debut at this year’s Miami International Boat Show, having had its world premiere at the Cannes Yachting Festival last September.

Designed for long cruising in comfort with family and friends, the Sixty 7 will ultimately succeed the Lagoon 630 MY and shares a similar beam of 10m to the 2014 model.

However, the newcomer offers huge gains in comfort, luxury, technology and deck area, the latter due to an overall length of 66ft 1in, just over 2ft longer than her predecessor, and a solid foredeck instead of trampolines. She’s also a lot taller. 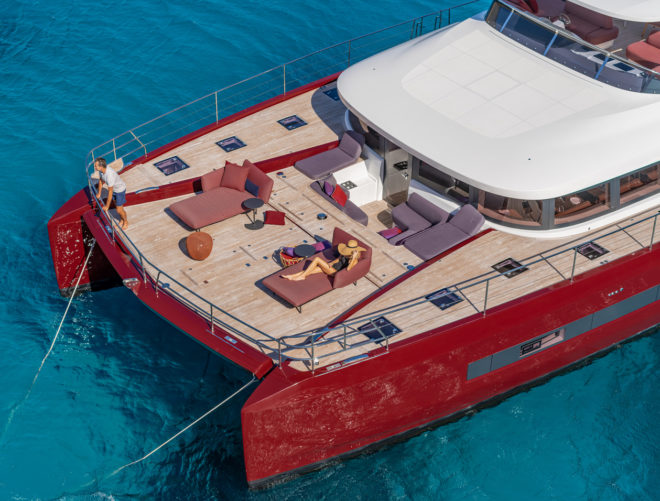 Like the Seventy 8, the Sixty 7 has a solid foredeck, which greatly increases the amount of useable living space on the motor yacht

New units of the Sixty 7 have already been ordered by clients in Malaysia and Taiwan through Simpson Marine, Asia’s largest yacht dealership, which has sold over 400 Lagoon catamarans around the region since being appointed the brand’s dealer over three decades ago. The first two hulls into Asia are set to be based in Port Dickson and Kaohsiung respectively.

Lagoon is firmly established as the world’s largest builder of sailing and power catamarans, delivering over 5,000 units since 1984. Part of Groupe Beneteau, it builds across three sites in France, with the Sixty 7 and other 50ft-plus models created at the Lagoon headquarters in Bordeaux, a site it used to share with CNB before production of the high-end sailing monohulls was recently shifted to the Group’s Monfalcone facility in Italy. 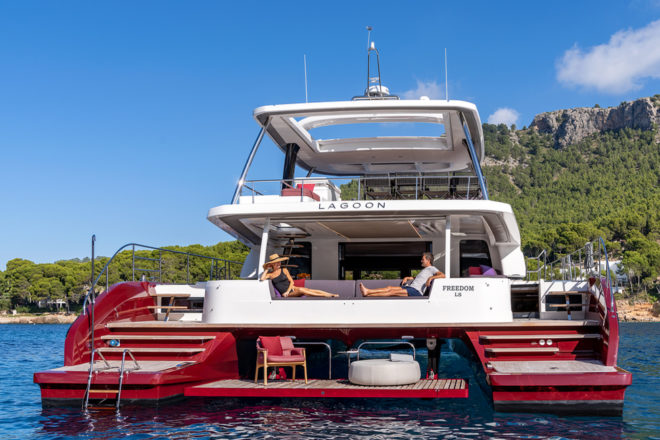 A wide hydraulic swim platform links the two transoms and creates a long beach club, which is overlooked by an adjustable aft sofa in the cockpit

The same line-up worked on the Seventy 8, Seventy 7 sailing cat and many other models within the current range, so familiar traits include elegant, modern lines, a superstructure smoothly integrated in the hulls and bevelled bows.

When boarding the catamaran, the space and deck area of the cockpit makes an immediate impression. The wide aft sofa is adjustable, so two sections can face either aft or forward, while forward is a large table, fixed L-shaped sofa and space for loose chairs.

Like on the Seventy 8, the Sixty 7 features a wide hydraulic swim platform – operated by a remote control – that connects the two transoms to form a single level above the water for relaxation and recreation with water toys such as paddleboards or Seabobs, while also enabling easy launching of a tender. 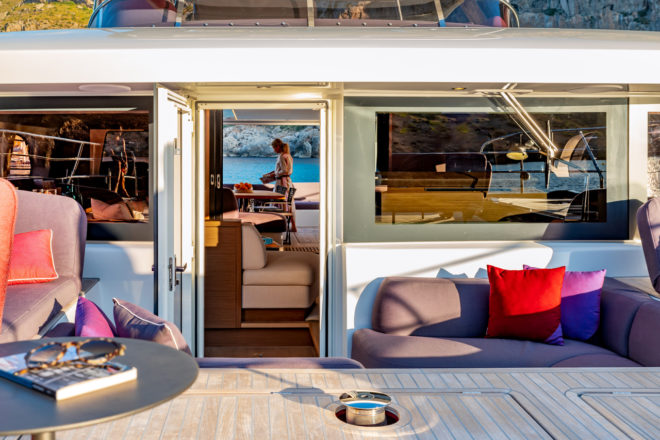 Other cockpit features include an outdoor galley that’s equipped with a refrigerator, sink, icemaker and waste-bin, while options include a grill and secondary coolbox for drinks.

Wide side decks and high side rails provide a comfortable and safe access to the foredeck, which offers one of the yacht’s largest social zones and can also be reached through a central door in the front of the saloon.

The Sixty 7 – again, like the Seventy 8 – has a solid foredeck that features two separate social areas, comprising the sunken lounge in front of the saloon door and the vast raised deck, where sunloungers and other loose furniture can be placed. 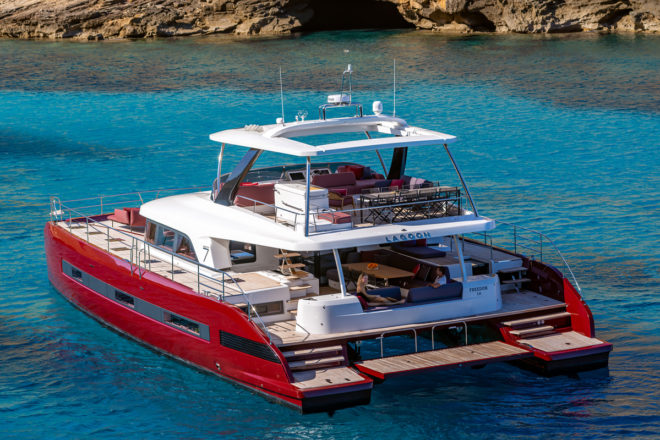 The Sixty 7 features a large covered cockpit that connects to well protected, wide side decks and the attractive flybridge

The flybridge, another large social area, is accessed by portside cockpit stairs, which can be covered by an electrically controlled sliding panel to protect the companionway and cockpit in the case of rain.

The flybridge is offered in three layout versions – Standard, Sun Bathing or Tribu. Features included as ‘standard’ are a central helm station with a bench seat that’s connected to an aft-facing lounger to starboard and accompanied to port by a forward-facing sofa, which sits in front of a galley with grill, refrigerator, sink, icemaker and bin.

The Sun Bathing version includes all the standard features and also has a long table to starboard beside a long sofa, which is connected to a huge, freeform sunbathing lounger aft, both seating areas providing extra storage space. 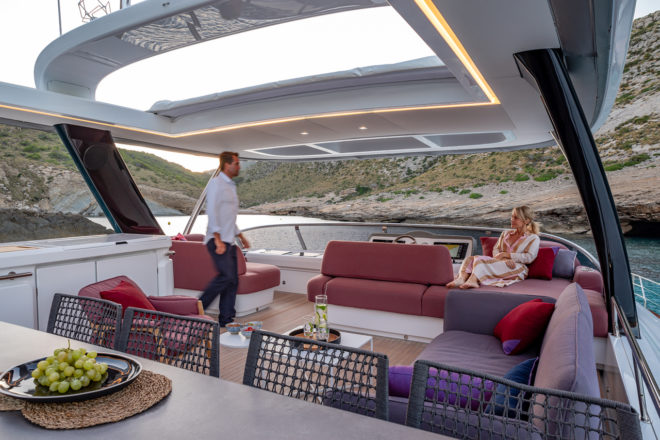 The Tribu version – as seen in the photographs – features loose furniture from the Italian outdoor furniture manufacturer, including a central sofa, chair and coffee table, and a long dining table aft. The cockpit can be completely covered by the hardtop, while a sliding sunroof is a pleasing option in the right weather.

The Sixty 7 is available in two versions – galley up or galley down. In either set-up, the saloon offers 36sqm (385sqft) of space, a lot of light and 360-degree views. The galley-up version features the kitchen to port and a central island counter, while starboard is a sofa-and-table arrangement similar to that found in the cockpit.

In the galley-down version, the saloon features a long sofa, dining table and chairs to port, and a similar starboard sofa as in the galley-up version but with a low coffee table. 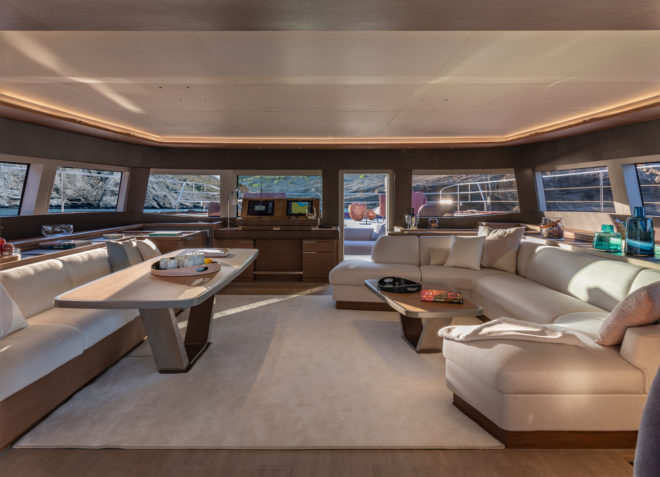 Forward view of the saloon (above) in the galley-down version, as chosen by clients in Malaysia and Taiwan; the dining area is portside and the lounge is to starboard 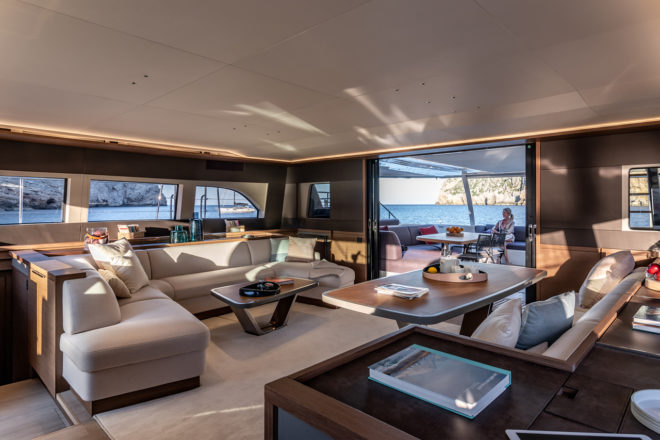 A good quality of finish is found throughout, with solid joinery on doors, drawers and the like, but just as eye-catching is the forward door – beside the helm station – which, when open, connects the whole main deck both by views and breezes.

Massimo Gino of Nauta Design says: “The interior of the Sixty 7 is the latest step in an evolution defined by open and uninterrupted spaces that join the interior and exterior seamlessly and open up the views all around you.”

Both the galley-down and galley-up versions are offered with multiple layouts for accommodation, with cabins served by four sets of stairs – on both sides at the front of the saloon, starboard side by the saloon entrance and forward of the cockpit stairway. 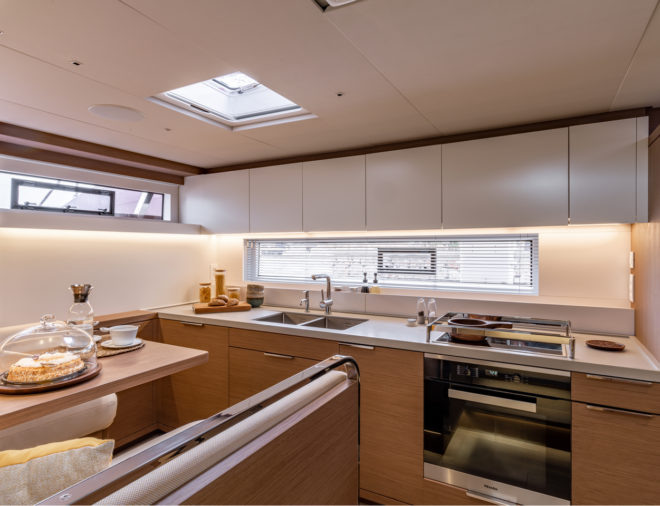 The latter stairs are used by crew in the galley-down version, where the cooking and crew mess is situated in the aft port hull, with a table and two bench seats for crew meals. This layout is offered with either three, four or five cabins, including forward doubles in each hull.

On port side, midships – forward of the galley – is the option of a guest double or crew bunks, the latter having access to the galley. In the aft part of the starboard hull, there’s either a long master suite, or a midships double and an aft twin cabin with sliding beds.

These cabin options are also available in the galley-up version, along with a double in the aft port hull, meaning the yacht can offer up to six guest rooms of similar quality, all with en-suite bathrooms, so ideal for charter.

If there isn’t a demand for so many rooms, the large owner’s suite to starboard is an appealing option and has access from both the saloon and directly from the cockpit.

It offers excellent views, as the king-size bed has been situated at an ideal height for the window, and also features elegant bedside cabinets and storage space. There’s a separate library area containing a sofa and dressing table, while further aft is the large en-suite bathroom, plus steps up to the cockpit. 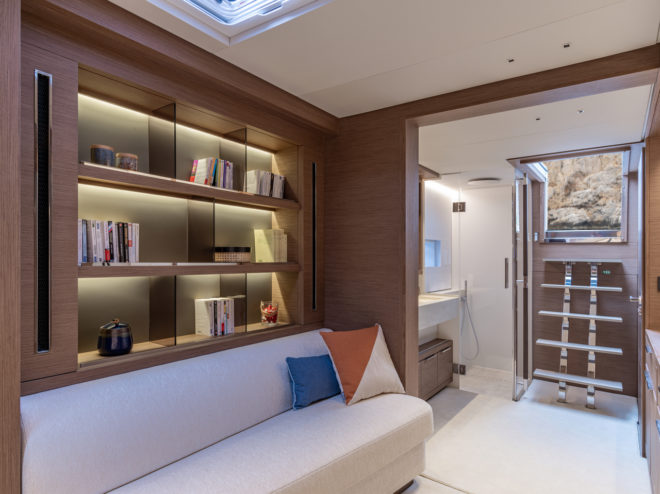 The master suite includes a ‘library’ and en-suite bathroom aft, plus cockpit access 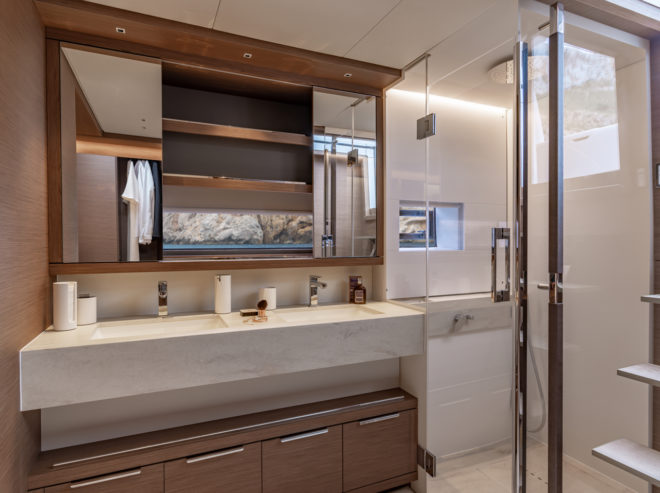 Lagoon worked hard on the atmosphere and ambiance of the cabins through a partnership with Sunbrella, offering a range of fabrics, as well as three décor options – Nomad, Pure or Fusion.

However, range is arguably the yacht’s most appealing spec. With the standard Volvo engines and four 1,375-litre fuel tanks, the yacht can cruise at seven knots for 2,700nm – more than enough for a trip from Port Dickson to Kaohsiung, for example.