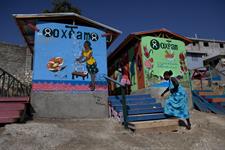 Oxfam International will cut almost 1,500 jobs and withdraw from 18 countries as part of a major restructure.

Oxfam has been carrying out a strategic review of its operations since 2018 and said the coronavirus pandemic had forced it to speed up its restructuring plans.

It said the changes would enable the organisation to be more effective at working with partners and would shift more decision-making power to the global south.

An Oxfam International statement said it would close offices in countries including Afghanistan, where it has worked for 50 years, Thailand, Pakistan, Haiti, Rwanda and Sierra Leone.

The charity currently works in 66 countries and has 20 affiliate members, including Oxfam GB.

It said it would retain a presence in 48 countries and would explore establishing new affiliate organisations in six of those, including Kenya and the Philippines.

Oxfam GB said earlier this month that it would press ahead with a restructure even though two-thirds of its UK employees were on furlough.

It said in January that it would be cutting jobs and reducing core costs in a bid to address a £16m black hole in its accounts, although it did not say how many jobs would be at risk.

In March, Oxfam GB placed two-thirds of its 2,100-strong UK workforce on furlough after coronavirus restrictions forced the charity to shut its chain of charity shops and led to the cancellation of a number of key fundraising events. Most furloughed staff worked in the charity’s shops.

Chema Vera, interim executive director at Oxfam International, said the organisation had made some “very difficult choices” about where it would no longer have a physical presence.

“We feel a deep sense of responsibility to the countries where offices will be closed and we will do everything we can to ensure the people we work with will be able to look to the future with confidence,” he said.

“This includes continuing to work with partners and allies in countries where there will be no Oxfam office to support social movements and influence governments and the private sector for positive change.”

He said the reorganisation would take time to complete.

“The tough decisions we announce today will allow us to continue making a positive impact on the lives of people living in poverty in ways we believe will be even more relevant and focused than before,” he said.

“It is the blueprint too for how we will usher in changes to the rest of our network to support it, ensuring that the global Oxfam confederation is on a stable financial footing.”

Oxfam International said it planned to explore new affiliate members in Colombia, Indonesia, Kenya, the Philippines, Senegal and the Pacific, which would be an amalgamation of five existing country teams.