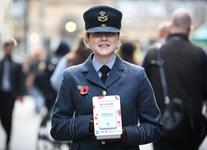 The Royal British Legion raised more than three-quarters of a million pounds through contactless donations during this year’s Poppy Appeal, more than three times the amount the method raised last year.

The charity used more than 900 contactless machines as part of its fundraising efforts for this year’s campaign, up from 264 machines last year.

The RBL will announce the overall sum it raised from this year’s Poppy Appeal at a later date. It raised more than £50m in 2018.

A spokeswoman for the charity said: “This year we made a big effort to get more contactless machines out with our collectors for our annual Poppy Appeal.

“It’s fantastic to see the public responding so generously. The money raised helps us provide lifelong support to the armed services community past and present.

“We are very pleased with the total for 2019 and we look forward to using contactless as part of our fundraising for the future.”